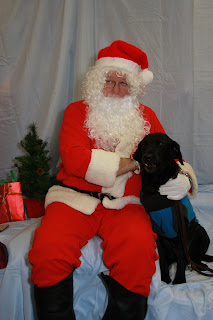 Hey everybody. I’m back again. I figure if Carin gets to talk about the holidays, so can I.

so I got my picture done with this Santa guy. What a letdown that was. He wasn’t that special. I didn’t like him too much because they made me sit with him and Carin stood away from me. I tried to come to her once and then got put back with this Santa person. I was a little worried she was trying to give me away. But after the flash! flash! flash of the camera, she took me back and we went on our way.

Carin keeps telling me that the lady who took care of me as a puppy sent another dog into that place where I learned how to do all that guiding stuff, and she’s taking care of another little puppy. So let’s count ’em. I’ve been told that puppy no. 1 wasn’t cool enough to become a guide dog. Or maybe it was he had some troubles with his elbows. No, he just wasn’t cool enough. I’m puppy no. 2, puppy no. 3 came to that graduation thing when I left with Carin. That was the last time I saw the nice lady. I guess puppy no. 3 was cool enough to be a guide dog. Now puppy no. 4 has gone to learn all the fun guide dog stuff, and the new one is puppy no. 5! That new puppy’s going to have fun. I’m sure the older puppy did, and now that puppy gets to have all kinds of fun with lots of other dogs!

Yup, my doggy clock was correct and we went back to the house with the cat and there was that thing that looks like a tre but isn’t and has all that stuff on it. I love that house. I like to run in it and everybody loves me there. I love getting pets from all of them. I think some of them must think Carin doesn’t give me enough pets because I go and bug them more than Carin. But Carin’s boring. These people are new, they smell different, and they’re just fun to get pets from. I can get pets from Carin all the time.

This time, Carin’s dad wasn’t walking with those stick things or that thing with the seat and wheels. He must be getting used to his new hip. And the cat’s getting braver! We slept with the bedroom door open, and she came in and checked me out, but she got really close, close enough to sniff. I did! I snorted! I was going to get up and see what this was all about, but then I got in trouble. Then another day, when I was sitting on the three steps down to the room where the cat usually hides, she came out and walked to the bottom step and gave me a good look up and down. Maybe some day we’ll be friends.

Man I was bored by the time we got to the house with the cat. We got so much white stuff and it was so cold that we didn’t really go anywhere the couple of days before. Plus, the fat man had already left us before we even left for the house, so it was just Carin and I. We played in the white stuff, but didn’t get any real work in. Then I know that we don’t often get a lot of work in when we stay at the house with the cat. So I was walking around to see what I could do to amuse myself.

Everybody was trying to play with these little wooden things that somehow fit together to make a picture. They call it a jigsaw puzzle or something. but this one was really hard for them for some reason. They’d try and try and try. There were so many little pieces. One fell on the floor, so I thought I’d show them another use for it. It’s not hard to chew on them, you see. Oh I got in so much trouble for that. come on! I was trying to show them how smart I was. Why get mad at a bunch of pieces of wood when you can just take out your frustrations and chew ’em up like a bone!

Carin’s famly is getting weird. This Christmas, they were really interested in my pee. I’d pee and then they’d look at it. What’s up with that? They’ve never cared about my pee before. Sometimes Carin’s mom wants to pick up my poop because she thinks she’s making life easier for Carin or something, but they never watched me pee.

then we went to that other house that I love so much. It’s the house that had a cat in it that also didn’t like me, but that cat’s gone. but I love it because sometimes Luther comes over. The next day we walked to the mall and we met up with…Luther! But Luther wasn’t wearing his harness, and he wasn’t the only dog there. There was another dog that wasn’t too much bigger than me, and he had the harness on now! So I’m confused. The guy who’s usually holding Luther’s harness put the harness on another dog? Did he get confused? I guess not. He doesn’t look confused. I mean, how could you confuse those dogs? Luther is yellow and the new one is black. Oh yeah, he might not be able to see that. Ok, Luther is big, and the new one isn’t. Even if I couldn’t see, I wouldn’t confuse those two.

I heard something about Luther being retired. Retired? what is this retired thing? Did Luther do something really bad and the guy decided to get a new dog? is that what retired means? Carin, I’ll be good! I won’t eat snow or sniff people or dogs or eat puzzle pieces or any of that stuff! Don’t replace me! I guess the retirement thing can’t be a bad thing, Luther still looks pretty happy.

I guess the new dog’s name is lars. At least I got to sniff both of them. I didn’t get to play with them. Maybe I will another day. I like Luther! I like Lars! Oh who am I kidding? I pretty much like any dog as long as they like me back.

Then we went back to the house with the cat in it, but the next day, we hit the road and drove and drove and drove back home. But when we got there, there were already extra people there. What was this? They were loud and stayed up late and stuff, just like last year. But there were a few less of them, and nobody was sleeping on the floor. Damn, I couldn’t lick anyone while they slept. No fun, no fun!

After a few days, the people left, and Carin did something weird. The day after they left, she harnessed me up like usual to go somewhere. But she didn’t let me do my business first! What was up with that? I kept trying to tell her that I’m supposed to do my business. I’d dive into this snowbank, that one, sometimes I’d try to talk to people as we went by. You speak human. You tell her I have to do my business and I can’t think straight until I’ve done my business!

We arrived at the vet’s place. I hate the vet’s place, and I haven’t done my business. What is this, torture? After she talked to the vet a bit, I guess he told her she was a bad bad human for not letting me do my business. Then I guess he was so disgusted with her that he decided if he wanted the job done right, he was going to have to do it himself. He took me away and told me to do it, and…then he caught it while I did it! What kind of sick freak is this vet? I knew there was a reason I shouldn’t trust him. He likes to catch dog pee! Chris Hansen should take a look at this guy.

When he was bringing me back, I couldn’t get back fast enough. I had to tell Carin what that strange man had done. She didn’t look pleased when we came back through the door and I was practically dragging him.

We sat there for a few minutes. Carin seemed kind of tense. Then that sick vet man came back and said something that Carin must have liked, because she seemed happy again. I guess he had good news about my pee. What a weirdo. It’s pee! I pee, it’s gone, end of story.

We haven’t done a whole ton of work, but it’s been kind of cold and stuff, so I guess I don’t mind. But, just like last year, life is back to pretty much normal. There’s really not much else to say. I’ll talk again when I have more news.