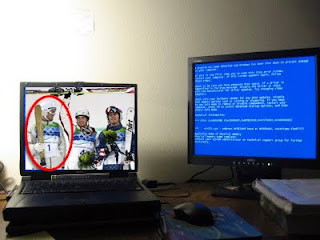 We here at Vomit comet would like to take this moment to congratulate Canada’s Alex Bilodeau on his Olympic gold medal winning performance in the freestyle moguls event. Not only was it a great victory for him and for the Canadian Olympic team as a whole, but it comes with an added bit of satisfaction for us and for anybody else who uses the internet (which means all of you, since you’re here).

Not only did Bilodeau’s win deny the gold to former Canadian Dale Begg-Smith, sticking it to a guy who some see as a traitorous babycompeting for a country with whiney officials in charge,but it also sticks it to a guy who, and I was not aware of this until today, is/wasa pretty bigtime spyware peddler.

So whether Alex Bilodeau realizes it or not, he won one for all of us, even those of us who don’t like sports. good on you, sir!