There is an update to this story. Barbie has found a home, and unfortunately, Carl is no longer with us.

I received an email from Megan, you know, Megan with Pasta. I’ve mentioned her and Pasta before. She told me about a truly sad story, and I figured it wouldn’t hurt to spread the word. I never know who reads this blog. So here’s the story.

If you or someone you know lives in Southern California, specifically Los Angeles County, more specifically the city of Lancaster, please read this touching story of two great dogs and see if you can help. It seems that a wheelchair bound quadroplegic woman passed away in her home in Lancaster, CA. She had two dogs, Carl, her service dog, and Barbie, a pet, who stood loyally by her side for two weeks, as nobody knew she had died. They had no food the entire two weeks’ time but somehow survived the ordeal. Carl is an 8-year-old Australian Shepherd and Barbie is a 7-year-old Cocker Spanniel mix. After being found, the dogs were taken to the LA County animal shelter in Lancaster. They are being held there until May 29th to give relatives a chance to claim them. But, none of the woman’s family wants or can take them. The woman’s neece is asking that if anyone is interested in adopting them, for them to contact her at _robynmeister(at)hotmail(dot)com (I wrote out the @ and . to prevent potential spamming.) Her name is Robyn Moormeister-Carter, and she can arrange a meeting with her father at the animal shelter in Lancaster to transfer ownership of the dogs before the 29th. After this, animal control gets the dogs and they could be put down if homes are not found.

If you live in the Lancaster area and are interested or if you know someone who is, please consider adopting these loyal companions and/or passing this information along. I hate the idea of any healthy dog being put to sleep, but especially when one of these dogs is a service dog. They’ve been through so much with watching their person pass away and being without food for two weeks and now are in cages. Its just really sad.

Please consider passing this along to anyone in Southern California who may be interested so these doggies find a new home.

Megan was nice enough to give me some pictures. So here they are. 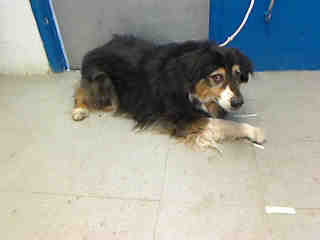 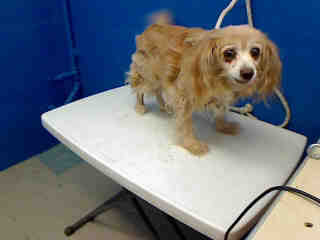 Just look at those pooches. Somebody’s got to want to scoop ’em up and take ’em home.

I know I’m nowhere near southern California, but I never know who reads…so there’s the info. Let’s find these wonderful dogs a new home, preferrably a home for both of them together!

By the way, here’s Megan’s
blog. I pop over from time to time.