There are 2 reasons why you’ll never catch me swimming or sleeping naked. I care about the feelings of others and nobody ever needs to be subjected to seeing that, plus I’d rather notget bitten on the knob by a katipo spider. 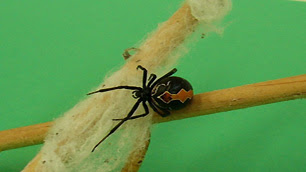 A Canadian tourist in New Zealand suffered a swollen penis and chest pain after he went for a nude swim and nap and was apparently bitten by a katipo spider.

The 22-year-old “woke to find his penis swollen and painful with a red mark on the shaft suggestive of a bite. He rapidly developed generalized muscle pains, fever, headache, photophobia [light sensitivity] and vomiting,” Dr. Nigel Harrison of Whangarei Hospital in Northland, New Zealand, and his colleagues reported in Friday’s online issue of the New Zealand Medical Journal.

The man developed chest pain the next morning, the New Zealand Herald reported.

Doctors assumed he had been bitten by a katipo spider, which they said are thought to be one of the most poisonous native creatures in New Zealand.

He was treated with antivenom and rapidly improved, though heart problems persisted.

Yes, the hospital has the word whang in its name.

the poor fellow had to spend 16 days in hospital but is apparently doing ok now, at least physically. If I’m him, I’m having a tough time getting undressed, falling asleep or getting anywhere near water right about now.