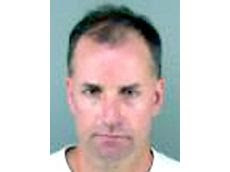 Robert Stephen Smith sounds like he’ll have quite a lot of convincing to do before a judge will believe nothing was going on.

The story goes that someone working near an ice cream shop saw Smith with his pants down, havin’ a grand old time. So, he called 911. A sergeant who was on his way there asked his son to zip by and see if he saw the same thing. He said he did. So, the police came to pick up Smith. Smith wasn’t down with that, so drove off. When police caught up with him, his pants were around his knees. Just to make things extra interesting, as they were trying to arrest him, he crapped all over himself. Add to this that Smith is a sex offender, and I don’t think the judge will believe that he wasn’t up to no good near the ice cream shop.

I love how he said he was trying to get a date when this happened, so would not have been touching himself. Hmmm. I think the two witnesses and his history of being a sex offender will be far more convincing than his cries of “I was trying to pick up! There’s no way I would have been doing those bad things you speak of.”

He says he’s not a bad-looking guy. Do you agree?