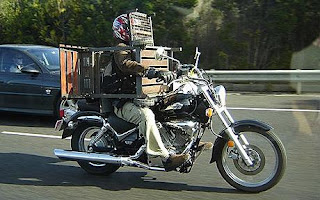 Hahahahhahaha! It’s a story like this that makes me giggle and giggle some more. Hahahahahahahehehehehohohoho!

The story goes that Michael Wiles was drivin’ along on his motorbike, when he saw a barbecue grill on the side of the road. I guess he really thought he could use one of these, so he picked it up. But the thing is he was on his motorbike, and motorbikes aren’t known for their trunk space. So how was Mr. Wiles going to get it home? Why, he’d just slip his body through it and peak out the holes, of course!

Naturally, people saw him, and snapped the picture above, which they emailed, and somebody called the cops, so his ride home in the barbecue grill was brought to an end. He was fined A$800, which comes out to about $750 Canadian. It’s never good when your defense lawyer is coming up with synonyms for stupid to describe your crime when the judge is in need of a few new ones.

And to make things that little bit funnier, the barbecue grill turned out to be a dud. That would probably be why it was, um, dumped on the side of the road in the first place.

Poor Michael Wiles. He just seems so sad. So easy to laugh at, but so sad.