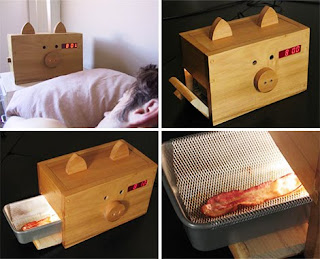 Somebody really doesn’t like an alarm clock that goes beebeebeebeep, and figures there are others who feel the same. So, whoever this is made at least a concept alarm clock with a totally different stimulus to wake the person up…the smell and sizzle of bacon! Yes, this alarm clock theoretically cooks a strip of bacon. Here’s how it works.

WHAT: An alarm clock that wakes you up with the smell and sizzle of cooking bacon.
WHY: No one likes to wake up, especially by an alarm. This clock gently wakes you up with the mouthwatering aroma of bacon, just like waking up on a Sunday morning to the smell of Mom cooking breakfast. Unless you’re Jewish.
HOW: A frozen strip of bacon is placed in Wake n’ Bacon the night before. Because there is a 10 minute cooking time, the clock is set to go off 10 minutes before the desired waking time. Once the alarm goes off, the clock it sends a signal to a small speaker to generate the alarm sound. We hacked the clock so that the signal is re-routed by a microchip that in responds by sending a signal to a relay that throws the switch to power two halogen lamps that slow-cook the bacon in about 10 minutes.

My only question is, what if you don’t wake up? Will it stop cooking? Or, will you start dreaming of smoke because your bedroom is now on fire? Well, according to RAIVE, this is likely a big ol’ joke.

This is a wooden box in the shape of a pig. It shows 4 stages; cooked bacon being the final product. Perhaps there’s a cooking device inside, but it’s unlikely as the wooden box would probably get too hot. Most likely just a joke.

I’m relieved this thing isn’t a real alarm clock, but I never know, since people have made USB toasters and USB scented oil burners before, so I had to see if this was a real product. I figured sending the picture to RAIVE would give me a pretty good idea in a hurry. Well, the idea did make me chuckle.