Looks like we can run the how many years in a row has some idiot been popped for drunk driving during Halloween season while dressed up as a Breathalyzer count to 2. Here’slast year’sin case you’ve forgotten it, and here’sthe story of 19-year-old Matthew Nieveen,2010’s entry. 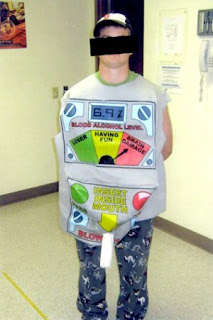 According to a police report, he was driving a 1992 Ford F-150 northbound on 33rd Street between Holdrege and Huntington when an officer saw the truck rapidly accelerate and cross the center line several times. The officer stopped the truck at 37th and Huntington, the report states.

The officer said Nieveen had watery eyes and slurred speech and smelled like alcohol. Police found a bottle of vodka, a half-full bottle of Mountain Dew and vodka and several cans and bottles of beer in the truck.

“He was dressed as a PBT (preliminary breath testing) alcohol sensor and had been attending a Halloween party prior to the stop,” the report says.

He was cited for second-offense driving under the influence, being a minor in possession of alcohol, an open container violation and negligent driving.

Somebody’s adult life sure looks like it’s off to a fine start.