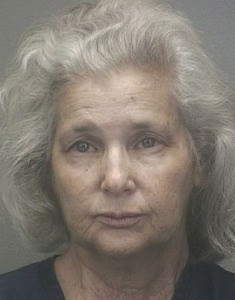 Now there’s a woman who won’t let anything get in the way of her fast food lunch.

Police wanted to stop Roberta Spen, 64, because they noticed her brake lights were faulty. So, they flashed their lights at her trying to get her to pull over. No sir, she was not going to pull over until she got her lunch at McDonald’s.

She pulled into the drive-thru and ordered lunch. The officer ordered her to pull out into the parking lot for them. No sir, no she wouldn’t. She paid for her food and drove off.

The officer was able to stop her for a minute outside the McD’s, where she only rolled her window down a crack, said she was not speeding and would not roll her window down or hand over her license. She drove away again.

Not to be deterred, the cop continued to chase her, flashing his lights and calling in backup. They tried to box her in at a red light, but she backed out of the box and kept going.

Only when she stopped at a gas station were they able to totally surround her vehicle, and even then, she did not come out. So, they smashed their way in and grabbed her.

And why did she try so hard to run from the cops? We’ll never know. She had no previous criminal record at all. But they now are sending her for a mental evaluation.

My only theory is that she met a bad cop along the way, and didn’t trust any cops. But even that is a stretch.

Either way, I doubt she got to eat her lunch.