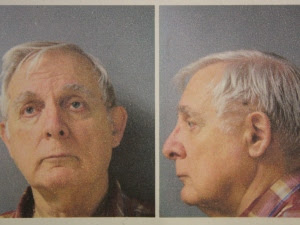 LaDuke was arrested on Monday and charged Tuesday with felony sexual exploitation of a child. His bond was set at $40,000 at a hearing at the Rolling Meadows courthouse on Wednesday and he posted the required 10 percent bail Wednesday evening.

for his part, LaDuke’s lawyer speculated that his client, who in addition to being a math teacher is also an ordained minister, may be suffering from some form of dementia and was perhaps just repeating what the police told him.

If all of this is true and LaDuke really has been at this for over a decade, how has he gotten away with it for so long? It doesn’t sound like he was exactly the king of discrete. Sitting behind a large podium or not, how does nobody notice you unzipping, taking down your pants and going to town? Even if you put an apron over it, if you’re any good, that thing’s got to be flapping in the breeze just a little, yes? Then again, it might be hard to muster up that much energy at that age, if you’d even need it.

and…how about we just end this here? There’s nothing more to the story and I’m putting far too much thought into something that really doesn’t need it. I don’t want people to start thinking I’m weird.