I realized my title might freak someone out. No, Trixie didnt’ die, and I’m sure I’ll be writing more stuff. I was trying to be somewhat funny, and probably epically failed, causing several unintentional heart attacks.

There were a few things I forgot to mention in my last dog post, and then a couple more happened, so I think I could probably squeak out another one now.

I had something happen the other day that made me realize why some people think the dog is taking me where I want to go and I’m just along for the ride, and it’s not all stupid. I realized that sometimes, it must kind of look like it. I don’t know why this took me so long to figure out.

I was going somewhere we go a lot, and Trixie seemed thrilled to bits that we were going there, so I hardly had to give any signals. I might have moved my hand ever so slightly to the left or right, but that was all it took. Then I noticed myself saying “yeah, that’s it!” That’s when it hit me. People don’t see the signals and then they might hear “yeah, that’s right.” and think the dog’s doing all the thinking. I used to think it was so ridiculous before because I would be doing a lot of signals and footwork, plus I thought the idea of an animal taking a person to a destination while the person had no mind of their own was utterly stupid. But so many people think guide dogs have such mysterious powers, and sometimes it appears that they do, so I could see how a casual observer might have the idea reinforced that the dog is doing all the work when they see a team going somewhere that they go all the time and it seems the person doesn’t have to do anything.

Then there are the times when her initiative shines through and she is taking me a different way than we usually go, and in a loose sense, she is steering more than I am. There are two ways to get to the main corner that leads to pretty much everywhere. There’s the way through the parking lot that I take all the time because there are lots of landmarks and it’s easy to know where I am, but it takes longer. Then there is a shortcut across the grass. I’ve usually only taken it with a friend walking alongside. In the winter, it’s impossible, but in the summer, it’s doable. I had never done it alone with Trixie because it just made me too nervous that I didn’t have a lot of landmarks. Then, while Trixie and I were playing on Flexi, I started noticing that she would sort of trace it out just running around. We would get close to the corner, and then I’d turn her around and we’d head back the other way

One day, I was running short on time, so I thought I’d take a large gamble. I knew that even if I didn’t have any other landmarks, I had the constant flow of traffic up on the main street. So after Trixie finished relieving, I got her facing towards the street and said “Trixie, find the pole.” To my utter delight, she deaked, bobbed and weaved, and my god, we were at the sidewalk, right close to the pole at the corner! wooo!

We have done it several times since, and she does it perfectly. That was one of those awesome moments when I realized how much my four-legged rascal does for me.

But even then, people need to realize that I am paying attention, and if something doesn’t sound right, I will stop and it’s me who has to reorient us. At the end of the day, I’m always the team leader.

I really hope all that rambling made sense. What I’m trying to say is in the technical sense, it’s not the dog’s job to dictate our destination, but once you’ve been a team for a while, the dog does tend to take more initiative, so it may sort of look like they’re the true decision-maker.

Something else funny happened to me while we stayed with some of Steve’s family the weekend of the wedding. The family we stayed with has 3 very cute kids and they make me laugh whenever I see them. One of the kids decided he was going to lie next to Trixie and imitate the positions she would put herself in. Being that Trixie’s like a canine pretzle, this became very hard very fast…but he just kept trying. It was funny. All of a sudden, he would say, “Oh Trixie, I can’t do that one.” I’d look and Trixie would have her head twisted down by her tail. No, I don’t think too many of us could do that. When Trixie wasn’t being terrorized by the puppy, she took a liking to the little girl, and would just sit beside her forever. As long as she was petting her, she’d just stay planted.

I have more recent Trixie pics. I have no idea what these look like, but a friend of a friend took them and put them up on Facebook and we’d just finished having a big conversation about not putting ugly photos up on Facebook, so they must look cool. She sent them to me, and since you guys love pics, here they are. they were taken outside at a park during a picnic. 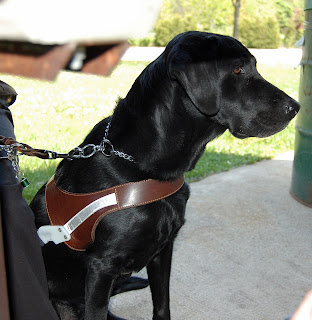 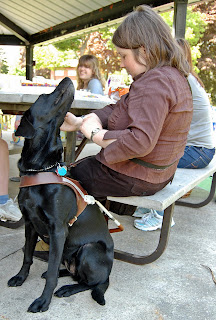 Woohoo! Remember back when I was wondering how I was going to bathe the Trixter now that our showerhead can’t come down off the wall anymore? Well, I’ve found a place, and it seems pretty cool. All I have to pay is $25 and they’ll help her get all situated in the tub. I don’t have to bend over, it’s all set up to be within easy reach and there are ties to make sure she can’t jump out! they have towels and they’ll clean up any mess she may cause by shakeshakeshaking off when she’s done. The lady said she’d even trim her nails for me, and she’s about due for a trimming, so why the hell not? The lady who answered the phone and who was there when I went to check it out seems really nice, and I got taught where it was. We’ve made an appointment for next week. Trixter loves finding it…right now. We’ll see how she feels after she’s been bathed once! I’ll write up how it goes.

I got asked a million questions about guide dogs by a bunch of very inquisitive kids the other day. I love that. They actually listen to the answers you give. I think among the funniest questions were “They let you take her home?” after I said I got her at a guide dog school. Then it was “How do you really know if she’s a girl or a boy?” On the subject of my blindness, “Does that dog really help you see?” “Why are you blind?” “Are there a lot of people like that?” “How do people get blind?” “How does it feel? Does it feel good?” Ah kids and their honesty. Among the guide dog-related questions, “How come we can pet her when she has that thing off but not when it’s on?” “What’s this for?” as they tap the handle. “Why can’t she sniff things when that’s on?” “She was taught that that means work? How? Wow!” “Does she tell you where to go or do you tell her?” The barrage only stopped when akid loudly informed his friends that “It’s raining! Guys, it’s raining!” I love kids, andI was glad an adult didn’t tell them to stop like they always like to do. I’d rather answer their questions as best I can than have them walking around afraid to ask. If I have the time to answer, I’m glad to.

And that’s about it. It was a short one, but oh well.