>I’m sorry for posting this right around breakfast time, but I publish as I find, unfortunately.

I like bacon. Really, I do. I’ll probably have some and an egg on toast this morning, in fact. But as long as I live I’ll never understand the need some folks have to put it on/use it to flavour everything whether it belongs there or not. 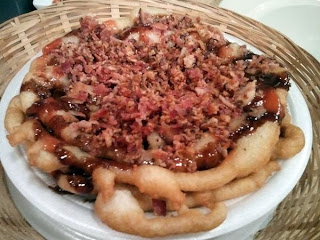 That right there is something called the bacakonator, and you can eat one at the Charlotte Motor speedway if you have no sense of taste or need to ingest it to win a sizable bet. It’s a big ass funnel cake covered in chocolate and strawberry sauces. Had well enough been left alone, you wouldn’t be reading this right now. But then I saw them. Words that right and proper explain where the word blarf came from. “Topped with a hefty helping of bacon.” Just . . . no! Is it an American culture thing to want to eat stuff like that? What’s wrong with grabbing a burger and fries?

Speaking of burgers, the same article tells us that the speedway also has you covered in that department if bacon and chocolate isn’t your thing.

If I were to even attempt that, anyone in anything resembling close range would be covered in something, that’s for sure.

I don’t have a good way to end this, so I think I’m going to go get some air and let my stomach calm down. You should probably do the same.