A few weeks ago, I said I was going to see a play that my friend Anton was in. I said I was worried about it being lame. I couldn’t have been more wrong. In fact, I think people should see it far and wide. It’s awesome, and not just because Anton was hilarious in it. He says he’s getting a DVD copy of one of the showings. I said I wanted one too.

The play did a pretty good job of making fun of the stupid things people say/think about blind folks and made the assumptions look pretty ridiculous. It also showed the characters using some pieces of technology with which we as blind people are all familiar, like talking clocks, JAWS and money-identifiers that the majority of the general public aren’t aware of, but they were used in an incidental manner, as they should be. The point was made, without driving it home, that losing your vision would be overwhelming, but you have to learn and go on so you can survive. It had a generally good story, with a pretty good twist. I thought it was funny that the sighted audience members laughed at different things than the blind folks did. It was kind of neat. apparently I laughed so hard that when the director met me after, he knew me by my laugh. Oh dear.

We had a lot of fun after the show with the cast, both at a coffee shop and then at a bar. MMM…Crabby Joe’s has good food. It also has a giant burger. I think it’s called the Mother Load burger, and you basically decide how big it should be by going down a list of 20 toppings and saying which ones you want. Good lord there were several types of onions amid other veggies, even onion rings, four cheeses, and four sauces in there. Anton got it, and we just took to calling it the “yes Please” burger because every topping he was offered, he said “Yes please.” And he ate it! He ate it so fast that one of our friends gaped when he realized the giant was gone. I guess playing Leon makes a man hungry. But his sister managed to take a picture of the great beast before it was no more. I hope it comes out clear. 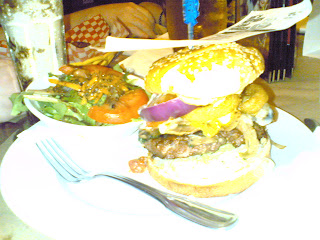 We all had a pretty good time at the bar, and I think we gave the cast a few things to tease Anton about. Hopefully they don’t bug him too much.

One thing happened to me that made me chuckle. I was standing in the coffee shop and a girl said “hello.” Of course I knew she was talking to the dog, but I like to respond to these people so I can hopefully stop them from moving to the next phase which is *petpetpet* “Hello puppy wuppy doodles…” She immediatley said, “Oh I was talking to the dog…but hello.” What, she was expecting Trixie to talk back? Then she asked me if I went to a play at the Fringe Festival. I said yes, and she asked me which one. I said “I Only See Shadows” which was the name of the play…but the girl thought I was talking about my blindness! I don’t think she ever caught on that was the title of the play. Damn it I hate moments like that.

that was a late night…and an early morning. We didn’t get back to Anton’s place until about 2, didn’t get to sleep until 3, and got up at 6 so we could get ready and be heading for the train station by about 7. A big thanks, as Steve already sort of mentioned, goes out to Anton for putting us up in his sweet little pad, and his whole family. His sister picked us all up from bus and train stations, took us back to Anton’s place, then took us out to Anton’s folks’ place, bought us dinner and told us not to pay, then Anton’s mom paid for our tickets, something I was completely not expecting. Steve certainly wasn’t expecting the elbow to the chest! Then Anton’s sister took one of us back to the bus station because he had to be back home that night, and took the rest of us to the train the next morning. She really, really didn’t have to do all of that, but we thank her. At least she did get to have some fun at the bar. I feel bad that I didn’t get to say a proper thank you as I zoomed onto the train and got myself situated. I’m always terrible at saying goodbye as I board a bus or train because I’m so focused on getting where I’m going. I’m really not trying to be rude.

So that was pretty neat. I hope Anton will be in another play, and I hope he invites us again…although maybe he won’t, after we gave his buddies so much dirt on him. Maybe we’ll just never hear about another play. That would be a shame.