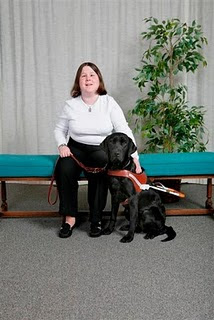 Ya know, you all need to convince Carin that I need to talk more. She doesn’t let me talk nearly enough. I mean seriously, I only spoke for part of a post when this place won an award, and I’m sure I’m the reason we won the award anyway. What else could it be? I’m just so cute.

This has been a kind of weird year for me. It all started back when I stopped wanting to play tug. I used to love tug. Give me a toy that I can grab an end of and I’ll go at it. Tugga tugga rar rar snort snort tugga tugga shakeshake tugga tugga roar! So, much, fun! But once I was playing tug and something didn’t feel write to me, so I said yeep! Carin stopped, and ever since, it just hasn’t been the same for me.

Then I wasn’t the happiest going up and down those weird stairs at that big house that used to have the cat. Come on, you can see right through to the back, and if you’re not careful, you can slide right on through them. But I got over that. But Carin was still worried about the whole no tug thing. So eventually she took me to the vet.

They had a good look at me, even put me on this thing that could take pictures of my insides. But they told Carin they couldn’t find anything. But they must have told her some weird stuff, because for a little while there, she gave me these yucky pills. Then she wouldn’t take me out with her to go anywhere except to pee, and even then, I had to wear a special collar. I could have told her that whatever made me yeep was gone, but she wouldn’t have listened. Plus she’d do other weird things like more obedience sessions and playing weird games of find the fat man and taking me to see the huppy and family without a leash at all. Hmm. No leash? Really?

Then I started to think maybe she didn’t like walking with me anymore. Maybe she liked that white stick thing, like the fat man uses. Was that it? I wasn’t going to work anymore? I tried to ask the fat man, but of course he doesn’t speak dog. He’d just tell me that she would be back. Every time she came back, I would sniff her. I was mad. I could tell she had been to places we used to go. To the drug store. In that nice lady’s car that always drives us to that City Hall place. To that other place where she meets up with that other guy with the white stick. Just what was this? I wasn’t sad anymore, I was mad! How dare she cheat me out of seeing all the people and places I love?

Then one day, as if nothing was wrong, she put my gear back on and we headed out. But she insisted on making me heel while she used the stick thing. Just what was this?

The first place we went was to the vet. The vet? That’s my first trip out? You are mean, Carin, really you are. But the vet must have said happy things, because after we left there, she let me work normally! They must have talked some sense into her, telling her it wasn’t right to take me away from all the people and things I love so much.

After that, I thought I’d be extra good. I would do everything I was taught, to the letter. I would show her that working with me was good. Really, I would show her how her white stick thing doesn’t know how to avoid the ice. It doesn’t know how to use the path. See all the things that thing can’t do that I can? See? See? Well I guess it worked, because she hasn’t left me at home ever since.

But after all that bad stuff happened, something reeeeally goood came out of it. I met my bestest friend in the whole wide world. I have a doggy friend, and she’s perfect!

Don’t get me wrong, I’ve had a few dog friends over the years. There’s Rosamae, and Luther, although I’ve not seen Luther in a long while, and Lars, who I only saw once, but thought he was pretty hot. But this dog, Ruby, tops ’em all! For one thing, I get to see her all the time. Sometimes we’ve even gone over to her house so we can play! And Ruby never jumps on me and goes up and down, up and down. She just licks my face and talks to me. She chases me around the room, and squeaks her squeaky toy at me. I love her so much that if we see each other and we don’t get to walk at least a bit together, I pitch a fit. Roooooo-beeeeee! Rooooo-beeeee! Come back here Roooo-beeeee! And she does the same. Ruby, just where have you been all my life? Don’t ever go. You hear that, Roooo-beeee?

And because of Ruby and Ruby’s person, I met a new vet! And I like everything about this place. The other vet, well, I liked the people, but if I could avoid going in there, I would. I would pretend I didn’t know where the door was, and Carin would get mad. But if we don’t go into this place, I get really upset. You don’t take me close to this place and not go in. That’s just not cool, and I’ll make my thoughts known. The people at this place are really nice to me. One of them even gives me snuggles and belly scratches if the other one is looking at me! Hey, I’m always up for a snuggle and a belly scratch. And a treat. And a snuggle and a belly scratch. Another belly scratch? Yeah. And they look at me right in front of Carin. They don’t take me away to some other place. That makes me feel soooo much better.

Hmmm what else is new? Oh yeah. The huppy’s gotten so much bigger, and he finally walks. He started walking a bit after the last time Carin let me talk to you guys. Now he walks so much that we don’t always bring the huppy car. And he can go faaaast! And he can talk. He can say my name, and Carin’s name, but for a while, it sounded really weird. But he says it like Carin now. Can you believe he’s had another one of those parties to mark another 7 doggy years? I sure can’t.

But he likes to try and pull my tail and smack me. I think he’s trying to go pat pat pat like Carin does, but it’s more like slap slap slap. Carin and the huppy’s mom are trying to teach him to be nice to me, but he’s sneaky. Carin, you promised me you’d protect me. You’d better get at it. I don’t say anything, but pulling on my tail is just no good. You usually catch him, but that huppy is sneaky and fast!

Usually Carin knows what I’m trying to say to her. I come over to her and bonk bonk her on the arm with my nose? It means follow me, I have something to show you. Probably the door because I have to pee. I jump around at food o’clock and food o’clock? It means feed me. I start running back and forth when things go boom outside? It means I don’t like this at all, fix it. But the other day, she totally didn’t get it!

It wasn’t quite bedtime pee o’clock. I came over to her. I had to tell her. There was a bad storm coming. I licked her. I licked her ear. I bumped her with my nose.

No! No no no! You’re not listening! I jumped! I snorted! I licked frantically.

“Oh! You must really have to pee,” she said.

No no no! She still doesn’t get it! She put the harness on. Hmmm. Maybe we’re going to warn the huppy’s family. Maybe? We get in the elevator. We get out. Oh no, we’re going to go out. Out in this! I started to walk slowly. Now she was confused. Well, what took her so long? But she kept going outside. As soon as we got out there, I heard a great big boom! One of those booms in the sky that sometimes happens after a flash! That was what I was trying to tell her. I didn’t have to pee at all! I wanted to tell her about the boom!

So what did I do wrong? I mean, when she asked if I had to pee, I was trying to tell her no with my jumping and snorting. Hmmm. I do jump around when I do have to pee. Hmmm. I guess she didn’t know the difference between a yes jump and a no jump. I guess she needs more training in dog speak.

So we took a big walk down to that place where she says sometimes Christmas presents get picked up. We got a little box. But what was in that box? A present for me! Ooo!

I loooove this little present. It’s fuzzy. It’s squeaky. It’s easy to push around. It makes me go grrr at it. But it confuses me. I should be able to rippa rippa rip in there and get the squeaker out. But it won’t let me in! Come on, you look so, so, so easy to break! But you won’t break! Oh well, one day, I will win. Just give me time.