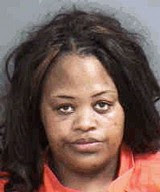 Don’t get between Hersha C. Howard and her girl scout cookies. she might chase you with a pair of scissors and clobber you with multiple boards.

The story goes that Howard came into her room-mate’s bedroom in the middle of the night and demanded to know if she ate her thin mints cookies. The room-mate said she had fed them to Howard’s children because they were up in the night and hungry. And that’s what started it.

The woman offered Howard $10 to pay for the cookies, but reports say Howard refused and the two women began to argue. The argument became physical and the woman’s husband pulled Howard off her, while she ran from the room.

The woman then ran to the kitchen, where Howard followed her, knocked her to the ground and continued to hit her. The husband separated them again, allowing the woman to run out of the house. Howard, reports say, followed and picked up a sign and began to strike the woman again.

I feel sorry for the room-mate, but who thinks it’s a good idea to feed thin mints cookies to kids at 1 in the morning? Yeah, they’ll go right back to sleep after that. Although, how do kids who live with a mom like that sleep anyway?