>When our computers broke the other day, hopefully we’ll have a longer post about that when we figure out exactly what happened, we had to call in our friend and super tech. He’s the one who likes to be paid in good turns for someone else, although this time he had a beer, so we’re gettin’ somewhere. I wish we could say who he is and how awesome he is, but we’ll just have to stick to saying how awesome he is. Anyway, after he resuscitated our pair of computers turned paperweights, he told us about something he had seen somewhere. He said he saw something resembling a dreamcatcher, you know, one of those wooden things with yarn in a spider web inside it? Well, inside this circle were some twisted letters and numbers, and it was called a dream captcha. We laughed and thought that was the funniest thing ever.

Well, here’s the guy making these. Here are the two pictures that were on his page. 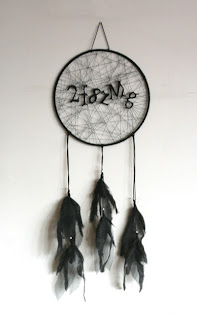 This is what RAIVE says about them:

It looks like a wall decoration with feathers hanging from the bottom. I can’t figure out the code in the round part of the decoration. Almost looks like a captcha code.

Poor RAIVE folks, they’ve been solving CAPTCHAs for way, way, way too long. I wonder if they tried to solve it, and/or how long they tried. I wish I could reply and tell them what this was, just so they can get a chuckle along with us.

I guess these have been around for a little under 2 years, so I’m late to the party.