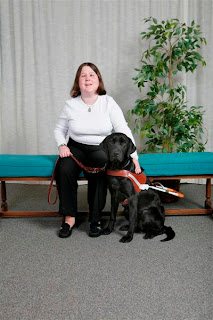 Hey everybody. It’s been a while. did ya miss me? Of course you did! Everybody loves me and misses me and wants to pet me and…oh yeah, I can’t get a pet. I’m working right now.

So the c-c-c-c-cold is coming back. But somehow, this year, it doesn’t seem so scary and confusing. for one thing, not as much white stuff has come down. sometimes it fades away again. It’s nice to see the grass underneath again. That way, I know it’ll be back. Last year, I thought I’d moved to another place, a place with the same buildings as before but this was the new ground! Yuck! Now I know better. Plus, Carin isn’t ramming those god-awful shoes on my feet. she’s gone straight to the goo. It’s good stuff, that goo. I remember what to do. I slow down for ice, but sometimes I dont’ see it when it looks just like the road. but if she tells me to slow down, I figure there’s probably a good reason and she’s not just trying to stop my fun. I don’t want her to fall! She fell once this year, and that was enough! Oh yeah, and I know which mounds of snow to climb over and which ones are not for climbing. I don’t have to sniff that white snow stuff. Snow shmow. It’s nothing new. I mean I’ll sniff it when we’re playing, but not when we’re working.

I’ve also noticed that I don’t get as cold yet. We haven’t had to break out the fur for my fur yet. Last year, I was a wimp dog. It would get sort of cool and I’d shake shake shake! I was such a sissy! Not this year. I have more fur!

I’ve noticed I’ve gotten even more praise these days than ever before. that makes me want to work even better. We mastered a hard route the other day because I’m just that good. I mean, she knows where she’s going, but sometimes she doesn’t know exactly where to turn. that’s where I come in. There’s this place where we pick up little wrapped boxes…parcels. She says they’re presents for people, but not for me. Ok, I’ll have to sniff them when we get home. I like to sniff mail. Anyway, we always go to the same place, so once I figure it out, I just take her there! I’ve been called all kinds of things by people who were watching us. Let’s see, there was wonderful, and fantastic, and super, and that word I already know. genius. Carin smiles whenever they say one of those words, so I know they’re good things. Plus she gives me treats and lots of love. I’d work all day for that.

there are certain words people call me all the time. Let’s see. I’ve been called beautiful, and pretty, and gorgeous, and the other day I got called handsome. Hmmm. that’s a new one. I’m handsome? I guess it’s a good thing.

I’m glad we’re not getting on big buses and in cars and in flying car bus things so much now. We did take one more trip, but it was back to the house with the cat in it. I can handle that. I know the house with the cat in it is one of ours. Carin said she wanted to come home because her…dad? Yeah. He had something happen to him. something happend with his hip. I think that was it. I know hips are important, they checked mine when I was a puppy. they were all about making sure I had good hips. She said something about he needed to have his hip replaced. How do you replace a hip, if hips are for humans what they are for dogs? I don’t get it. but maybe I just don’t understand Human as well as I thought I did. but we had to come home and see him, that’s all I knew.

That silly cat. She got so afraid of me that she ran outside and stayed there, under the deck, through the rain, for a whole day. They called her and called her and called her and she wouldn’t come back in. Now that’s a sissy. they call me scared. that’s scared. I don’t even chase the cat, and that scaredy cat will run from me like I’m out to get her. Oh well, it means more pets for me while she’s hiding out there. Can I meet one cat that loves me? Can I? Please?

Something was up with the big guy human who lives at the house with the cat. She calls him dad. Yeah I guess we were coming home to see him. Ok. When we came home, he was standing at the top of the stairs holding onto stick-like things and leaning on them when he wanted to walk, or sometimes he walked with this thing with wheels that had a seat he could stop and sit on. I just knew I should walk slowly around him and not trip him. Carin thought I was so smart to do that. Well I don’t want him to fall on me do I? Plus, I’d heard all this talk the week before about how she didn’t want her dad to trip over me, so she might have to keep me on a leash. Keep *me* on a leash? Now I’m offended! I’m too good a dog to be kept on a leash in a house I know and I’m good in! so I knew I had to be good good good. so I was.

Carin keeps saying she’s going to get my picture taken with this Santa person. she’s been all into having my picture taken lately. We went into this room with boxes to sit on and chairs and lights and coloured walls that could move. I just had to sit there beside her in my harness and look at this human who was holding my treat bag. Well, was I going to look anywhere else? She was holding the good stuff! then, there was a flash! Then Carin took my harness off and got down on the floor with me, and there was another flash! It reminded me of the time we were in that room and that guy had all the squeaky toys and then there’d be a flash and then she got this card and you could see our faces on it the way they looked on that day.

So now she says she wants my picture taken with Santa. who’s Santa? I don’t know who Santa is. why is he so special that he gets a picture taken with me? She says something about sending the pictures to the one in California who took care of me when I was a really little puppy. Ooo! I get to send her mail. I still love that bed she sent me back a while ago. But I don’t think she can smell me like I smell her. Humans just don’t know how to use their noses. Oh well, they don’t know what they’re missing.

I think that’s about all the news I’ve got. Maybe I’ll have more in a little while. If my doggy clock is correct, which it is most of the time, we might be going home to that house with the cat in a while and we’ll all sit by that thing that doesn’t smel like a tree but looks like one and they’ll take papers off stuff and I’ll have to lie still even though I want to chew up all the paper on the floor. Then maybe I’ll have more stories. Life is never dull.