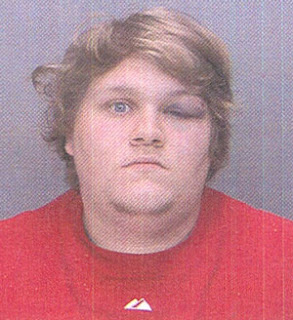 For what it’s worth and because there are always at least 2 sides to every story, here’s a little more onMatthew Clemmens, the fellow who threw up on the 11-year-old daughter of a police officer during an incident at a Phillies game.

According to his uncle Dave,Clemmens was not drunk and did not throw up on the girl on purpose, rather he choked on a hot dog and was therefore unable to prevent finding himself in the middle of what I suppose could best be termed a recycledfood feud.

It should be noted that Uncle Dave was not at the game when the incident took place, but he called a local newspaper to defend his nephew after speaking to him once he was released from jail.

I guess on one hand it’s nice to see a family willing to have each other’s backs and take each other at their word, but on the other I’m not sure if I were in a similar position that I’d be putting my ass on the line for somebody if I wasn’t ya know, a witness to what happened. It’s one thing to say that you can’t imagine things going down (coming up?) that way because you’ve never known him to be the type of person to be so foolish, but calling the newspaper yourself just because somebody told you he didn’t do something seems a little…I’m not sure what the word I’m looking for is. Maybe premature, maybe foolish, maybe both. I hope he’s right, because it really sucks thinking that there are people in the world who’s capacity for assholery can sink them that low.

In happier news, the Phillies organization hasoffered the Vangelo family the chance to take in a game as VIP guests, and they have decided to take the team up on it.Their day will include free tickets to the game, a player’s-eye view of batting practice and in some unfortunate but amusing wording on the part of the paper, “dinner on the house.” Isn’t that kind of what started this whole mess in the first place?