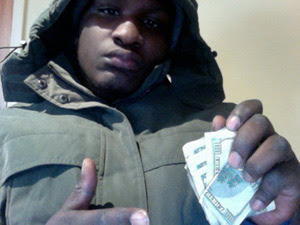 It seems that social networking criminals are no longer content to get themselves arrested simply by staying logged in on a victim’s computer. Ifthe story of Rodney Knightis an indication of things to come, the job of the police just got a lot easier.

Knight broke in to the Northwest home of Washington Post writer Marc Fisher in December, police said. He helped himself to a number of items, including two laptop computers, a new winter coat and about $400 in cash.

Before leaving the scene of the crime, he put on the winter coat and posed with the cash for a photo he took of himself. He then posted his “loot” photo on Fisher’s son’s Facebook page, the writer said.

Unlike some, Knight did have enough sense to plead guilty to the charges of second-degree burglary brought against him. That’s more than can be said for well, pretty much everybody who’s ever done something similar as far as I can recall.