>Wow. Just when I was starting to think that this parents passing out and leaving their kids unattended in dangerous circumstances thing had topped out withthis family outing, along comes Jessica Ockman to trump the hell out of it. 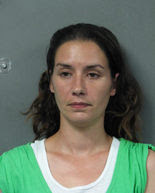 Deputies called to the scene because of Ockman’s collapse walked out to her car, which was parked at one of the fuel pumps, and found Ockman’s son along with the body of 22-year-old Shelby Fleming of Lafourche Parish.

Fleming was pronounced dead at the scene. Her cause of death is unclassified pending the outcome of toxicology tests.

Ockman is not being charged in connection with Fleming’s death, which investigators have said was not the result of a criminal act.

Deputies found Ockman unresponsive on the restroom floor along with a lighter and a spoon, Fortunato said. They also recovered a white plastic box containing marijuana that she’d thrown into a nearby garbage can.

Yes, mommy dearest here left her not quite 2-year-old son in the car with an expired pal for over an hour while she took some happy meds and went nighty night in the washroom.

The baby was taken to a local hospital for observation, but no further information on his condition is available as I write this. I imagine he’ll be ok, at least physically. Mentally is anyone’s guess, and I’m glad I’m not going to be the one stuck with those therapy bills.

Ockman was booked into jail on a variety of charges, but later released without bond due to prison overcrowding. I’d love to see a list of the people they kept instead of her. I’ll bet a few of them aren’t nearly as dangerous.