The story of 68-year-old Karl Ludwig Eichner and the head-shaped rotting watermelon he was adamant did not belong in the ocean is another of those times when I need say nothing funny or serious to add to the strangeness of it all. 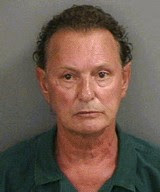 A woman who was at the beach with a friend observed a rotting watermelon that had been carved and shaped into a head sitting on the sand. The watermelon seemed to have been abandoned so she placed it in the ocean in hopes that it would disintegrate and not attract any bugs.

Eichner retrieved the watermelon from the ocean and placed it back on the beach.

The woman placed the watermelon in the ocean once again.

Eichner approached the woman with his swim noodle full of water and dumped the water on her as she was sitting on her towel. He then punched her in the cheek.

Eichner was arrested and charged with battery. NO word on court appearances or jail time yet.