>While no one was looking, somebody must have slipped instant idiot crystals into Spartanburg, South Carolina’s water supply.

In the same week as Ashley McDowell scored herself that sweet wooden iPad comes word that a couple of women made out even better. $250 for a laptop? Good deal…aside from the part where you discover it’s made out of paper. 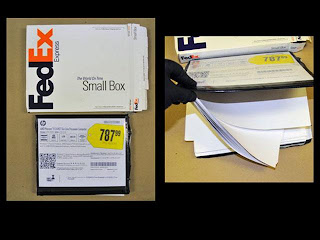 Police said two women were approached by a man Wednesday night at a Spinx gas station who said he had laptop computers, iPads and iPods in FedEx boxes. He claimed he had gotten them at a discounted price.

According to investigators, the man offered to sell the women a laptop. They said after getting cash from an ATM, the women left with what they thought was a laptop but later discovered the box contained a white power cord and a stack of paper wrapped in black duct tape.

Investigators said the man who sold it is described as having gold teeth and was with another man in a white four-door car.

If you recall, one of the men in the iPad case was also said to have a gold tooth. This, unsurprisingly, is leading local police to speculate that the two incidents might just be related, though they can’t say for sure. It’d be one hell of a coincidence if they somehow weren’t, no?

We’ll be sure to update you all when an arrest is made, or more likely when another of Spartanburg’s best and brightest buys a surround sound system made out of bricks.