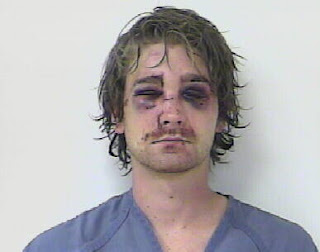 Lately, I’ve noticed a lot of people looking for Timothy Placko. Everybody remember him? He’s the guy who was found with a van full of weird things like women’s sonograms and teeth. Incidentally, I never heard how that trial went.

Well, I guess he didn’t get a long sentence, because the searches have also been looking for him, and the words “recent charges”. So Mr. Placko has been at it again. Since he was so weird last time, I wondered what new and exciting things he had gotten up too…

And all I could find was this mug shot. So that’s what he looks like. Anyone wanna describe this fellow? I guess he was booked on Thursday.

I’m pretty sure it’s the same Placko. He’s about the age he should be, judging by his age when he was found with the van full o weirdness, and this happened in the same city. All I know this time was that he was charged with aggrovated battery and attempted burglary.

So, I have to wonder. Was he stealing more teeth? More sonograms? More shell casings? Another laser pointer? What was he after? And was the deadly weapon another machete?

So many questions, so few answers! Anybody got any leads on what this strange fellow was up to?