Good god! Whoever it was at Summer’s Eve who came up with this add that tells women basically to douche for success should be immediately fired. Hell, whoever was in charge of creating and approving and dispatching the ad should all be fired. That not one of them screamed nononononono! means they’re all really really dumb.

The ad, which appears in the October issue of Woman’s Day, gives eight tips for women who hope to get a salary bump at work.

The first tip, under the subhead “How to Ask for a Raise,” includes this kernel of advice: “It should start with your usual routine … including showering with Summer’s Eve Feminine Wash or throwing a packet of Summer’s Eve Feminine Cleansing Cloths into your bag for a quick freshness pick-me-up during the day.”

Because part of asking for a raise involves gettin’ dirty with the boss. Yeah, uh-huh. Forget all the work you’ve done, forget that that’s just completely degrading.

Somebody got a hold of the ad before it went to print, and critiqued it, which caused other blogs to pick it up, which caused a whole sea of rage from women everywhere. Now, Summer’s Eve is apologizing, and working to get the ad removed.

“I would like to first of all apologize if this
ad in anyway has offended anyone. We are taking immediate next steps to remove the ad from circulation.”

Hey there lady, did you actually write “anyway” instead of “any way”? They are two different things. I would hope that that was a transcribing error, and you didn’t actually write that. And how did you think it wouldn’t offend women? Sure, we could assume that maybe you just meant that if we feel good about ourselves, we will do better, but…that is not what people are going to think you’re saying. Why would douching with Summer’s Eve be in tip no. 1 unless the ad’s creators thought it was more than just a confidence-booster? 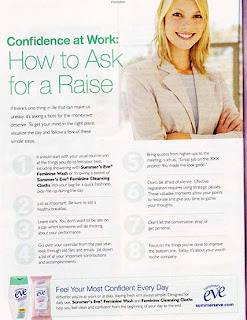 Here is a picture of the rejected ad. I sent it to RAIVE. I want to put the ad’s text up here so we have the ad, in all its glory. As soon as I have it, it’s goin’ up here for the benefit of fellow blinks.